Hans Hollein is dead, and quickly the news has spread through press and internet, in this world of mindless copy/paste, celebrating his larger works, and ignoring that what he thought and drew smaller was precisely the most relevant for the architecture history.

Just 30 years ago he received me for the first time in Vienna, after 9 months of relentless persecution, when I finally got down the wall of his impassable secretary. She concluded with a dry “Sie sind so lästig, Herr Estevez, ich möchte Sie nicht wieder sehen”: exquisite reflection of the famous character and (bad) mood of her boss. However, just seven years later this turned into a recognized “wiedersehen”, when she forwarded me that Hans Hollein was saying that my PhD thesis was the best writing done about his work. Clear, this ended when he contracted me as teacher at his Viennese Meisterklasse, at that time already deconstructivist, exactly where today teach the stars of the digital architecture, Zaha Hadid, Greg Lynn, Hani Rashid.

Now are the words “Alles ist Architektur” that gave him fame copied in headlines from one media to another. I imagine him with his special smile, funny, seeing as, even after death, he has silenced that was Le Corbusier who published “Tout est architecture” decades before, because few have read page 114 of the book “Al margen: escritos de arquitectura”. For my part, I remain inaugurating the academic courses with that slogan written on my shirt, chosen for each first day as the best start. 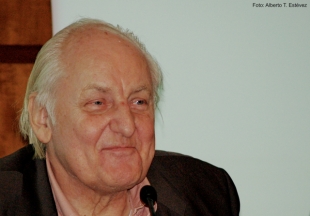 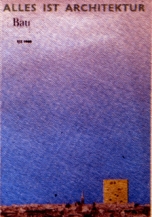