“I have Dalinian thought: the one thing the world will never have enough of is the outrageous.”

Salvador Dali was a self-confessed genius with an ingenious flair for publicity. An internationally renowned modern artist, he also designed fur lined bathtubs, he lectured with his head enclosed in a diving helmet and he claimed that at the basis of his ideas were, as he put it, cauliflowers and rhinoceros horns.
He paints like this:

Perhaps his most famous work. It is called  “Persistence of Memory”. 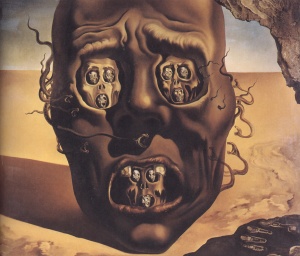 In contrast to this dream like picture, here is Dali’s surrealistic view on the horrors of war. It is called “The Face of War”.
And now an example of Dali’s late phase. 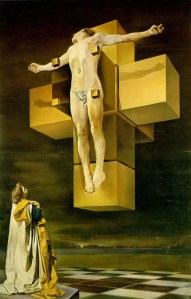 “The Crucifixion” showing his current preoccupation with religious subjects.
Let’s take a look at one of his major paintings.

It is called “Sleep”. Dali painted interruptedly. So much so that he painted a moment of sleep.Now let’s try to find out some more about the enigma of Salvador Dali. Dali, first of all, was a remarkable painter and dedicated his life to art, in view of this, he accounted for various and varied eccentricities. For instance, he was known to have driven in a car filled to the roof with cauliflowers. Despite his hi-jinks, time and again he called himself a genius and he was very serious about it, but behind the extravagance was a more subtle, private man. His artistically formative years revolved around his intense relationship with his wife, Gala Diakonova, and their treasured joint project, a house in the remote Port Lligat on the Mediterranean coast near Cadaques, Spain.
It served as his retreat from the world, his only permanent residence, and his primary workplace. The house is characterised by a Mediterranean vernacular. Its defining features are white-washed walls, ceramic roof tiles, meandering interior pathways, and cascading volumes typical of Mediterranean villages.
The simple, intimate, modular spaces reflect Dali’s faith in traditional values, his love affair with his native landscape, and his desire to blend in rather than stand out. The craggy coastline typical of the region, where he spent his summers during his youth, fractures light and creates the particular velvety, unnatural sky and textures found in his paintings. Significantly, Dali often made conceptual drawings while traveling, then returned to Port Lligat to actually paint his works in the natural setting that helped inspire his aesthetic.

The first hut served as an entrance, dining room, living room, studio, and bedroom. A few steps led up to a modest kitchen, bathroom, and shower. In these small spaces, Dali led a Spartan life. He wrote: “It was there that I learned to impoverish myself, to limit and fix down my thought so that it would become as effective as an ax… It was a hard life, without metaphor or wine.”

Interestingly, he represented his artistic philosophy as irrational and revolutionary, but his motivation, the Port Lligat house, was fundamentally mundane and rational. The house began to reflect the inconsistency between his invented persona and his more moderate, conformist self.

Dali dedicated his passion and energy to other architecture projects, especially the Theatre-Museum in Figueras, a shrine to himself and his body of work. In 1982 he took up residence there. Seven years later, the man who converted two fishermen’s huts into a village died on the stage he designed.